After a four week hiatus from racing KCL (and almost riding in general), I was back at it this week for the final edition of this year’s/season’s KISS Community League! This race was to make amends for the Conegate fiasco earlier this year. Lucky (or unlucky) for our team, this race was only added for the Europe time slot; giving us one more shot to absolutely destroy ourselves before the nice weather rolls around.

As it was a make-up race, we were back on the Richmond UCI course for 2 laps. Again, this course features three climbs back-to-back-to-back with a long flat section in between. The climbs, in order, take 1min, 45sec, and 2.5min. 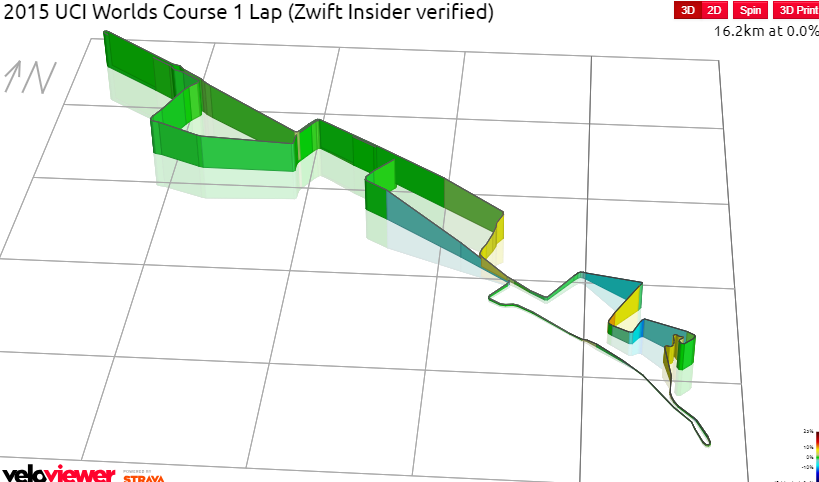 Another result of this being a make-up race was that there was a smaller turn-out; only 200 people. That didn’t stop the big names like Alex West, Leandro Messineo, Lionel Vujasin, and Tim Cartwright (who’s one of the original Zwift racers, but I haven’t seen much of him recently) from showing up to make things tough.

Unfortunately our team had quite a few casualties due to nice weather so we were only fielding myself, Mike, and Hal in A this week. We did however, have Oliver sneakily avoiding the suffering by being DS for us.

Instead of giving the usual play-by-play breakdown, I thought I would do something different this week. It’s not often you get to race the same course with almost the same people but with quite different fitness. As I mentioned earlier, I’ve barely been riding this past month, managing 2-4hrs per week, down from 10-12hrs. However, the rides I have been doing have almost all been pretty high intensity. I’d put a picture of my Strava fitness-freshness graph, but frankly I’m still too scared to look at it. So instead of play-by-play, I’ll breakdown how I fared compared to 7 weeks ago when I raced this in Week 2.

The roll-out was hard as usual, but the four of us on the team Discord were all in agreement that it wasn’t as hard as Week 2. The results?

Yup. Nearly 20W or 0.3w/kg less for me. And I rode it better position-wise but probably not power-wise, trying to stick in the top 30 riders. Next up, Libby Hill. It felt bloody hard, but still not has hard as last time. I felt a bit slower up it but I wasn’t dying as much when I came over the top. Mike also threw down a killer effort here to stick with the front group. 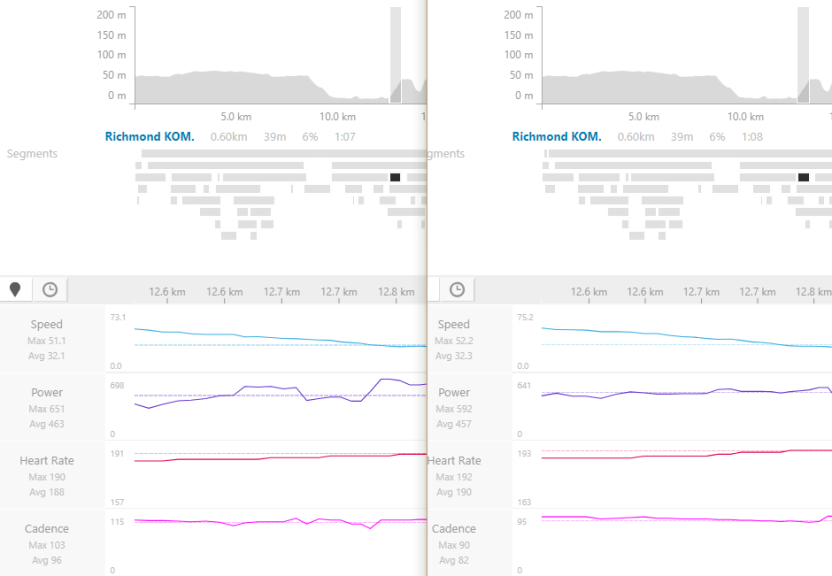 Huh. Interesting. Slightly higher power, lower HR, much higher cadence, and lower RPE. Position-wise I also rode this much better, coming over the top in 40th as opposed to 60th last time. Now for 23rd street. I was in a smaller group of riders this time and had a feather power-up, so I surged out of the group about half-way through to try to bridge. Also, because Oliver was yelling in my ear.

Same time (to be expected, it’s really short), but nearly a full w/kg more power, a much higher cadence, AND a lower HR. Crazy. I recovered really well on this descent, able to bring my HR down 10bpm lower than I had in Week2. The same story continued into the Governor climb. I matched my power, had a much higher cadence, and a lower HR. I was also able to throw down a solid dig over the finish line to make it into the second group on the road (again, also because Oliver was yelling in my ear).

Unfortunately, Mike dropped his chain here, lost a minute, and fell out of the front group. Lucky for me, that meant we were in the same group now. Mike and Tim chased hard on the flats to bring us back to the front group before the descent – a rare feat that the 2nd group actually makes the catch. That was also borne out in the data, as I averaged about 0.5w/kg higher than in Week 2…but for nearly the same HR.

Into the Libby Hill and 23rd Street again the same trend continued. I kept matching my Week 2 power while hitting a HR about 5bpm lower and a cadence 8-12rpm higher. The small group I was with “eased up” on the Governor climb, doing about 5w/kg. This is where I struck out on my own in Week 2, trying to chase Mike down. While I wasn’t going to really bridge to anyone this week (the gap was 40sec), I probably should’ve attacked since I wasn’t in full survival mode yet. Instead I sat in and had a meager sprint at the line, finishing mid-group.

So overall, what’s the damage compared to Week 2?

Average power is 3W lower, 20min power is 0.3w/kg under, HR is 3bpm lower and the other three power categories are all about the same. I’m not really sure what conclusions to draw from these differences in numbers. It feels like I’ve lost fitness, but the numbers, at least on this course, seem to suggest otherwise. But with these results, the KISS Community League is brought to a close! 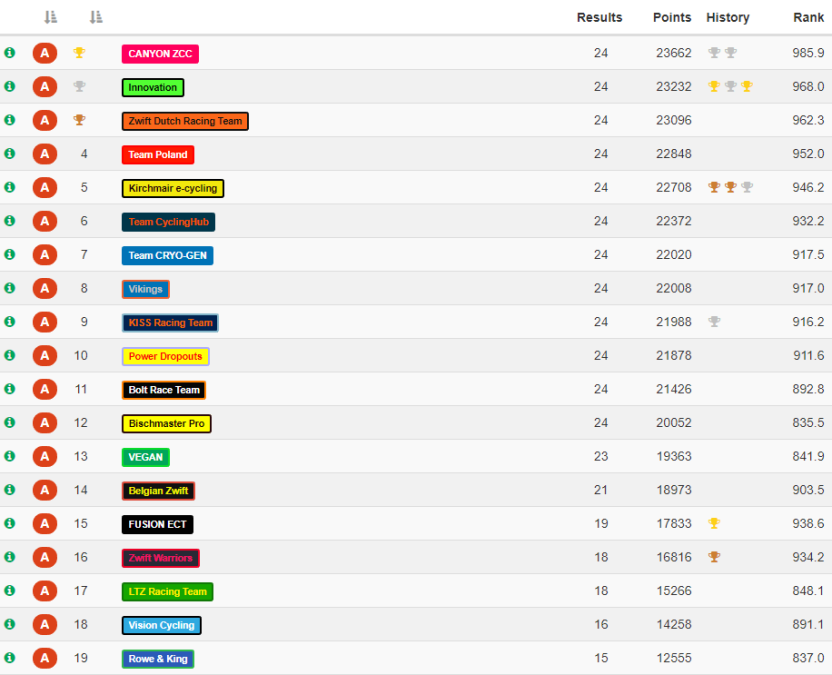 10th! We hit our secondary goal (our primary goal was to have a good time racing as a team, which I think was achieved)! While we didn’t succeed in beating CyclingHub, I think it’s pretty impressive that we did beat Fusion ECT, one of the big sponsored teams on Zwift. We may not have the most w/kg, but the team was able to string together a series of very consistent performances. Consistent enough, in fact, to put Mike in 5th across all 9 nine races!!

I also think we generated more content around KCL than any other team (except maybe CyclingHub) between Mike and Dean’s livestreams (here and here), Oliver’s race videos, Dean’s blog, my blog, and, of course, Hal’s rider rankings.

It’s been a blast and I hope this team continues in another race series! But for now, it’s time to ride outside a bit.

Cheers and Ride On!